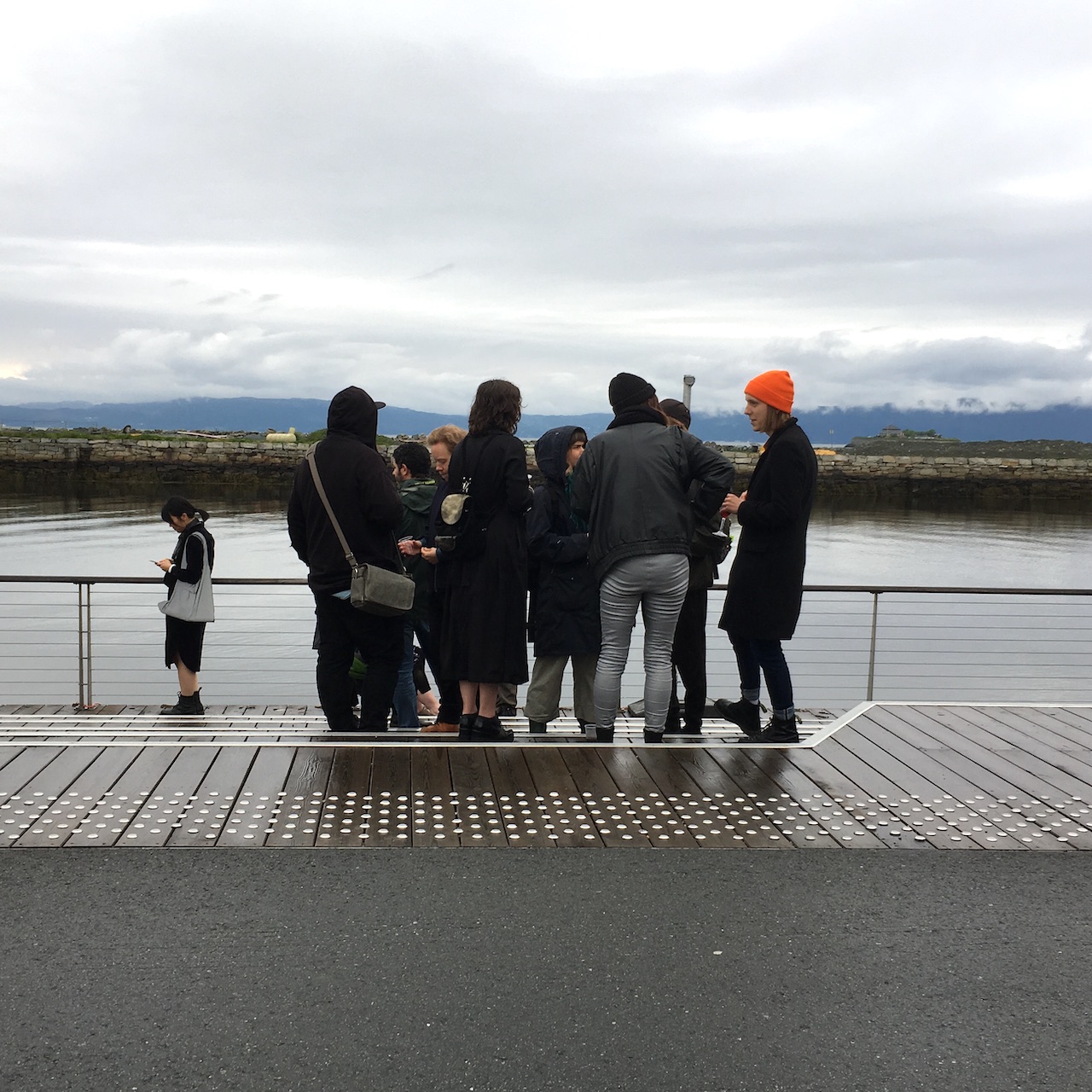 I’ve done my bit, says RAKE. I’m tired. I need a rest. It was fun while it lasted. RAKE’s gaze drifts away and becomes vacant. Like Atlantis, like Bas Jan Ader.*

Now that RAKE is about to become history after eight years of operation, it is time to look back at this small, 40m2, cuboid exhibition space and review all it has held during its existence. RAKE was the brainchild of artist Charlotte Rostad and architect Trygve Ohren in 2011. Not only has RAKE been a showcase for art and architecture in Trondheim, it has also attracted attention for the projects it has organised beyond its own four walls. In 2013, Ohren and Rostad invited some forty artists to occupy a condemned art nouveau building on the busy Elgesetergate, resulting in a month of artistic activity at the venue. The following year, they invited Spanish artist Jordi Colomer to Trondheim, where he showed his videos in a darkened multi-storey carpark. Both were wide-ranging collaborative projects with a focus on urban development and building conservation in Trondheim. The fact that the art nouveau house is still standing, despite the demolition plans, is probably due in large part to all the attention the RAKE project attracted.

In their final project, Omfavnelser / Embrace it, RAKE is again creating artistic contexts outside the showroom. The artists Jacob Jessen, Edvine Larssen, Magdaléna Manderlová and Elin Már Øyen Vister have contributed a total of four separate works. What they have in common is that they all relate to Brattøra, an island in Trondheim’s harbour district, and are situated in public settings. Moreover, two of them use media that allow them to be experienced in isolation from their sites: in the one case as downloadable podcasts, in the other as feature items in Dagbladet’s weekly supplement. These transient formats are particularly interesting in relation to the experimental and short-term potential of art in public spaces.

The exhibition’s eye-catcher is Jacob Jessen’s Revolutions (RAKE). With a crane engine at its heart, RAKE has been turned into a spinning carousel. The fjord provides a beautiful backdrop to this merry-go-round RAKE, which, despite its transformation, has not become frivolous, but remains true to itself, with its sober appearance and façade of recycled windows. The fjord and the changing colours of the sky are reflected in the panes of glass, creating the impression that at one moment the building is glowing, at the next, that it merges with its surroundings, depending on the time of day and current weather conditions.

Visitors are invited on a guided tour inside RAKE by stewards wearing hi-vis vests. It’s fascinating to be inside the carousel and to experience the slow turning of the building. For a moment you find yourself suspended over the quayside. The mechanical throb of the motor and the smell of timber are reminiscent of an old wooden boat.

One revolution takes about 6 minutes. The stewards, who take turns to stand beside the building, are recruited from various Trondheim art institutions. Based on their own practice or that of RAKE, they seek to strike up conversations with visitors about the city’s art scene. This relational approach feels inclusive and adds depth to the work. With its kinetic aspect, Revolutions is visually compelling and one of the best works I’ve seen this year.

Changes in the weather are also an essential aspect of Magdaléna Manderlová’s contribution When clouds appear like rocks and towers. Visitors are fitted out with audio players and headphones. Set up at different places on Brattøra are four masts with sensors that track the position of visitors and receive incoming weather forecasts from a satellite. This information is mixed with sounds the artist had recorded in the area earlier on.

I hear the sounds of waves, rain and wind, and other things that are less easy to identify. The soundscape changes as one moves from place to place; sounds grow louder and evolve or fade away to be obscured by others – often the nuances are subtle. It isn’t easy to know which sounds have been picked up by the sensors and which were recorded in advance. Neither is there any obvious connection between where I move and the way the sounds develop. Perhaps one has to come back several times to clarify the impression.

When clouds appear like rocks and towers is about exploring the uniqueness of a place in terms of its sonorous qualities. By amplifying sounds one normally wouldn’t notice because they tend to get swamped by other noise, this work encourages conscious listening and wonder.

Whereas Magdaléna Manderlová lets people explore Brattøra in terms of its soundscape, Elin Már Øyen Vister studies the same area from the angle of its geological substrate. Beneath Your Feet (RAKE) consists of a poster and a series of podcasts. The poster shows the different layers of clay and stone directly beneath RAKE and the geological development of Trondheim as a city. One can download the audio files and listen to them on a personal mobile device while strolling alongside the fjord. In contrast to Magdaléna’s work, which is spatially limited to Brattøra, Beneath Your Feet (RAKE) can be downloaded and listened to wherever one happens to be. In the podcasts, which are issued once a month through until October, the artist relays her meetings with specialists in different fields to discuss the past, present and future – always in relation to the ground beneath RAKE.

Beneath Your Feet (RAKE) falls into a category of recent art projects that show a sensitivity for and focus on ecology and the non-human sphere. The work differs from an ordinary science podcast in that it includes artistic elements and Vister’s attempts to give a voice to nature itself. The first episode of the podcast features a field recording from the Vatnajökull glacier in Iceland, joik singing and a geo-engineer talking about his favourite rocks, conglomerates, all of which provide new and unexpected insights.

Edvine Larssen’s Curtain IV is the second work to use a transient medium independent of the location, despite its focus on Brattøra. The work was gradually revealed over a twelve-week period, as a series of double-page spreads in the weekly Dagbladet Magasinet.

The magazine format has the potential to reach a wide audience. Dagbladet’s supplement has a circulation of around 760,000. That said, it seems reasonable to ask whether the average reader would linger on the item, or simply turn the page. I’m not convinced that this medium can convey a clear impression of Brattøra, when we consider that many readers have probably never heard of the place, let alone been there.

In Curtain IV one senses the influence of Japanese aesthetics and philosophy, which value, among other things, contemplation and the beauties of imperfection. The first double-page spread used a simple but dramatic visual idiom. It consisted of a broad semi-circular red form hovering above a pitch-black background. Deep within the glowing red colour, one discerns the texture of wooden planks. The succinct, cryptic text included on the page describes an evening situation by the sea: sunset, a sailboat just visible on the horizon, a holm tinted red by the evening light and a singing watchman. Who is this watchman and what are we actually looking at – the bow of a boat, the holm? The text uses the serial format and raises more questions than it answers.

Omfavnelser shows what works of art in public settings can be. In addition to podcasts and magazine items, a work can take the form of a meeting place or a conversation. The temporary, processual and transient qualities help us to view the works as contemporary and relevant. At the same time, they demand more of their audience. We have to find a copy of the Dagbladet magazine every week in order to see how Larssen’s work develops, and we have to invest a fair amount of time if we are to listen to all of Vister’s podcasts. The fact that Manderlová’s sound work changes over time means that we will have to come back to Brattøra if we wish to find out how it evolves.

Although it is sad that this is RAKE’s last summer, the venue leaves behind an artistic legacy that the town can build on. While emptied of art for the occasion, RAKE has itself been transformed into an artwork, a kind of architectural sculpture, which throughout the summer will be filled with conversations about the city’s art scene – a fitting final gesture. 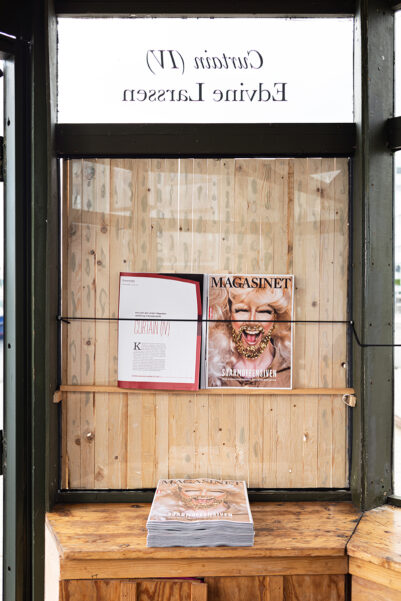 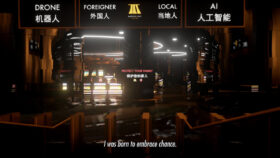