The creative power of the local 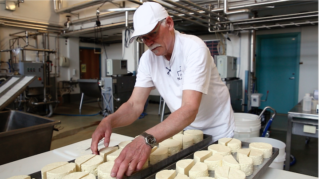 We are connected to the place, or places, where we live. It might be a matter of identity, or the ways our daily lives are affected by the quality of our surroundings. But as we become steadily more mobile, our power to shape and determine our local surroundings declines, with the result that the places where we live are becoming ever more uniform. When do we cease to be participants in our local environments and instead become mere consumers thereof?

As an architect, I work with the relationship between people and the places where they live. This doesn’t necessarily imply major physical changes to our surroundings. A small modification to a specific place or to an existing building can promote a sense of belonging, community, and a more attentive focus: What is there at this place? What used to be here? What could be here? What does the place mean to us today?

These were the thoughts I had in mind when, in 2016, I started a project that involved the revitalisation and poetic reimagining of a disused railway station at Hundorp in Sør-Fron. The assignment was part of the project Vegskille – kunst som stedsutvikling (Crossroads – art as local development), a collaboration between Oppland County, the municipalities of Nord-Fron and Sør-Fron, and KORO – Public Art Norway. The clients wanted artworks that would help to reinvigorate various locations in the county, Hundorp among them. Although Hundorp railway station has many of the aspects of a dead place, it still bears the traces of countless individual and collective histories. Although today’s residents of Sør-Fron are probably better connected to the outside world than any of their predecessors were, by means of both travel and information technology, it was Hundorp station that once represented their link to other places.

Having been granted access to the station building, I invited the locals in and served them coffee and waffles in exchange for their station stories. Many of those stories were about life at the station: being met or meeting new people there, or setting out and returning from journeys. I then turned fragments from these many conversations into a six-hour soundtrack that is now being played back through a horn speaker out on the station platform. In one clip, the contributor describes how his grandfather came down to the station to watch the first steam locomotive pass up through Gudbrandsdalen. Many years later, he and his younger brother went and stood in the same spot to witness the arrival of the first electric train.

In 2018, I was again invited to work with a local community, this time on a project at the now defunct Blaker dairy in Akershus. Just thirty-five minutes by train from Oslo Central Station, Blaker faces challenges as a community. Once an administrative district in its own right, Blaker currently belongs to the municipality of Sørum, but in the next wave of reform it will become part of Lillestrøm. For the people of the village of Blaker, the dairy and history of Blaker camembert, also known simply as “Blaker cheese”, are still part of their identity. It is a place where everyone agrees that the quality of Norwegian camembert deteriorated when the production of cheese in Blaker ended in 1988.

In this project, I wanted to highlight the Blaker dairy as an element of shared heritage by recreating the legendary cheese. With the help of the Blaker village women’s association, I was able to contact four former employees from the dairy. Although they laughed when I told them my idea, they were willing to get involved. It was a moving experience to invite them back and reunite them as a working group both with each other and with the place where many years ago they used to work. It turned out that their ageing hands still remembered how the milk curd should feel at each stage in the process, and how to fold the gold foil when wrapping the semi-circular pieces of cheese. Finally, we served the cheese in the former dairy shop. Everyone who knew anything about the subject agreed that this was the real thing – genuine Blaker cheese recreated after thirty years.

It takes time for sustainable local communities to develop. Consequently, a community rooted in a place is something worth protecting, understanding and cultivating. In projects such as the two just described, I seek to foster a culture of stewardship for local environments. To this end, it is necessary to challenge existing perceptions and methods for nurturing local identities from many different angles. Some things have to be built anew, but one also has to build on what is already there and to reinforce the sense of community, ownership and shared responsibility.

To me, these art projects are not so much about documentation or the transmission of history and cultural heritage. They are more about touching, revealing and reinforcing deep connections between a place, a product, working life, people and everyday existence. Strong links to one’s surroundings are not a disadvantage, but rather an enrichment and something we desperately need in an era that confronts us with constant change, new technology, virtual realities and challenges on a global scale.