We Feel Fine. The Common Sense

«Technology is changing us –

our attitudes, our behavior and our bodies,» states Melanie Gilligan in her introduction to The Common Sense. The artwork, presented as a short television series, attempts with an experimental narrative to tell the story of a future technology that enables people to experience each other’s physical sensations and inner feelings, and to share these directly with each other in real time.

The work features on a small and chaotic website, which alternates between being an actual information channel and an integral part of Gilligan’s artistic expression. Various juxtaposed statements fill the screen as one scrolls downward on a background of tumblr type images that promote the project, and that the user can with a click, ‘like’, or share through various social media channels.

Beyond this in the exhibition, are screened 15 episodes of a story that are divided into three ‘phases’. Previously these have only been shown, in Gilligan’s words, as a «nomadic viewing experience», spread respectively across three institutions: Casco, Utrecht, Museum De Hallen, Haarlem and De Appel Art Centre, Amsterdam, who co-produced the project. The Common Sense thereby appears for the first time in its entirety at a single location at Trondheim Kunstmuseum, on the invitation of director, Johan Börjesson. 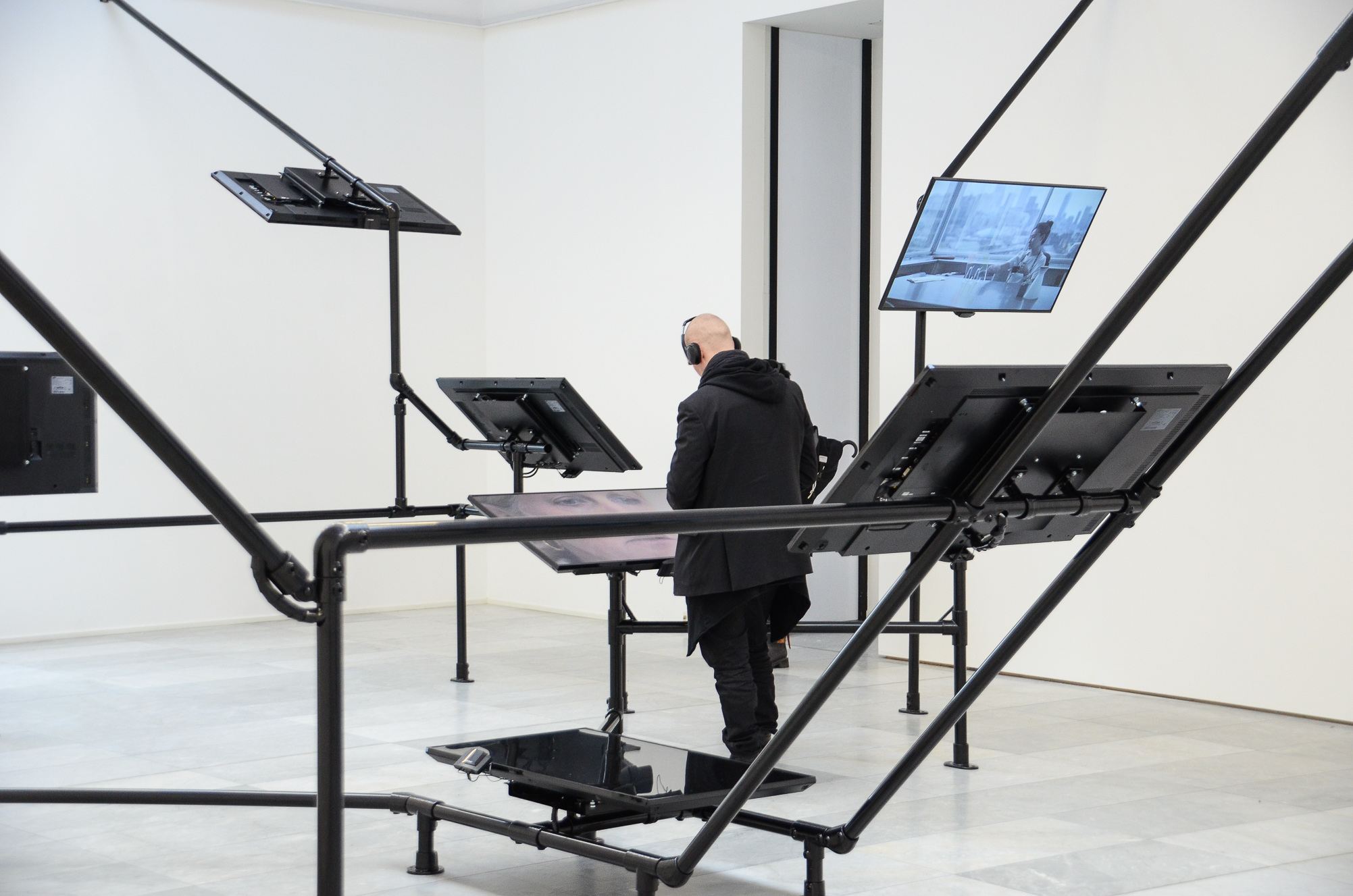 So here we the audience stand, isolated from each other by our respective sets of cordless headphones, that capture the sound of the individual episodes, before a crackling burst of static signals our entry into the frequency zone of the next episode as we move in front of that. Some viewers move with urgency from one episode to the next, while others flit impatiently back and forth or stand in front of one screen, but with furtive glances at those on either side as if the monitors represent separate entities.

It is its simplicity rather than its content that makes this a challenging work to swallow. Perhaps audiences are neither accustomed or prepared to dedicate just over one and a half hours to experience a work of art, or at least two treat a work of art as if it were a sequential television series. Trondheim Kunstmuseum seems to confirm this by inviting us during the course of the exhibition, to ‘binge watch’ the entire series on a single big screen.

By watching the whole thing the viewer is told a story about a society not unlike our own, set in an indeterminate future, where the aforementioned technology, an implant placed in the roof of ones mouth, allows one to share feelings in real time, and has become commonplace, expected to be used by everyone in both social and work environments. The young cannot even remember a reality without ‘The Patch’.

A teacher tells his class about the old days, before the now pervasive ‘patch’ existed, when people were limited to writing down their thoughts to convey what they were feeling, and about a closer past, one that maybe their parents have talked about, when technology was simpler and flowed in one direction only – The Common Sense. ‘Today’, the same technology has developed into and been integrated as bidirectional form of communication, where all sending and receiving of emotional signals occurs simultaneously, in real time.

When someone else’s feelings change how you feel, it can change a world. 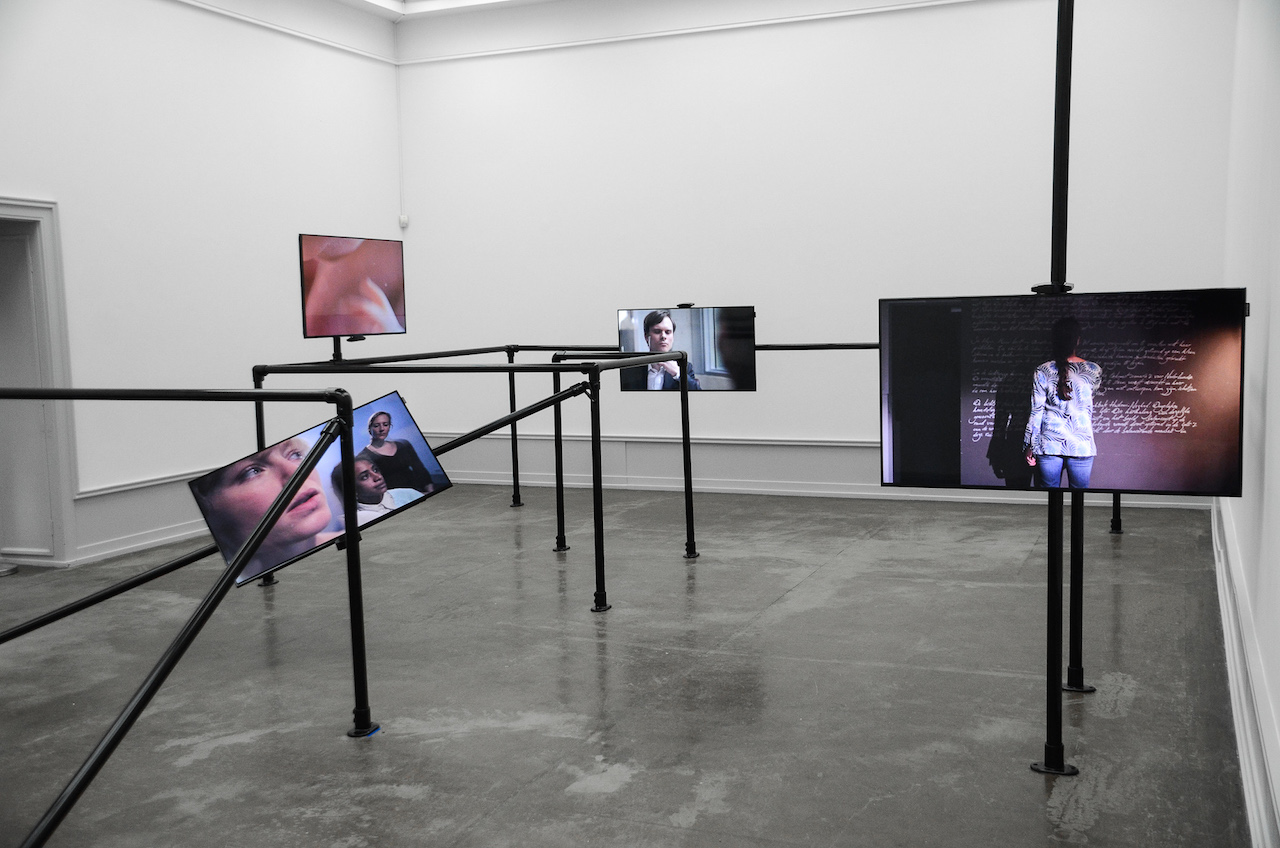 We also get an early insight into how the economy has changed. 70% of the population is unemployed while only 20% are successful in finding employment, as a result of the new technology. Several of the students excuse themselves during the lecture to listen in on their jobs; jobs that at any given time are hanging by a thread due to the fact that both workers and customers feelings and reactions are constantly monitored by both parties on an emotional level. The workers levels of motivation and sense of satisfaction are continuously measured. The tutor also reminds them to meet up for «repayment work» for the classes they are attending later in the afternoon.

– I heard that people will pay to feel unemployed.

– That’s a competitive area; there are so many people offering it.

Such is the background formed for a story that presents various characters and situations between which the consequences of using the new technology unfold. However, it becomes obvious that it is not only the ambiguous potential of the technology and its consequent, ‘alternate everyday life’, explored using the science fiction world’s ‘what if ‘ rhetoric, that occupies Gilligan. The Common Sense joins the themes of earlier works of her oeuvre, focussing on financial and political capital, and how emotions and sentiment underpin economic conditions in neoliberal and seemingly rational societies – issues that, to put it mildly, belong not only to the future.

This relationship is put to the test after the first few episodes, when the network through which the implants function, breaks down. After the initial confusion and fear has subsided and the technology comes back online, as if to emphasize the vagaries of the consequences of the choices we make in relation to technological progress, the plot splits into two alternate scenarios. Here we see how human ideology can lead us in one or another direction, and not least create social outcomes that are not a latent part of the technology itself, thereby changing the culture that created it.

Who is going to change the conditions?

Gilligan herself has stated that she did not have clear expectations of what she wanted to happen in her exploration of the interaction between humans and the fictional technology from The Common Sense. Originally she imagined that ‘The Patch’, could have a positive impact on how the economic mechanisms that her work discusses, affect us. However this notion quickly moved in a negative direction, and onwards into realms of uncertainty. The project has thereby become a platform that allows both the artist and her audience to reflect on the consequences that new technologies have, including their extensions such as the social media that already permeate our lives; and what happens if mechanisms or actors change the way they function or stop them from working altogether.

As a result of this, one story moves in a revolutionary direction, where people who have been ‘woken up’ by the temporary interruption, organize themselves in protest against what they realise has been an exploitative use of technology. They try to change assumptions of how to use it, or for that matter, not use it, for the good of the community, with the proviso that a new economic system will be introduced. The chapter can be read as a parallel to our contemporary demonstrations and riots, organised and spread through social media as a result of economic and political systems that are perceived as exploitative. These actions simultaneously question how our use of technology is changing us, and the way we exist within a capitalist system.

Moving in the opposite direction in the series, the relationship between humanity and technology has been normalised, and that many minds have, due to the implant, mutated their neural processes to a point where a much greater insight has been gained in our ability to read each others emotions and so on. A benign research program set up to study the implications of these changes, is however swiftly merged with questions of how new developments can increase profits or drive further technological progress. The young researcher finds it difficult to separate himself from this process.

How are non-individualistic people of use to the real world? They don’t buy. They don’t want to develop. 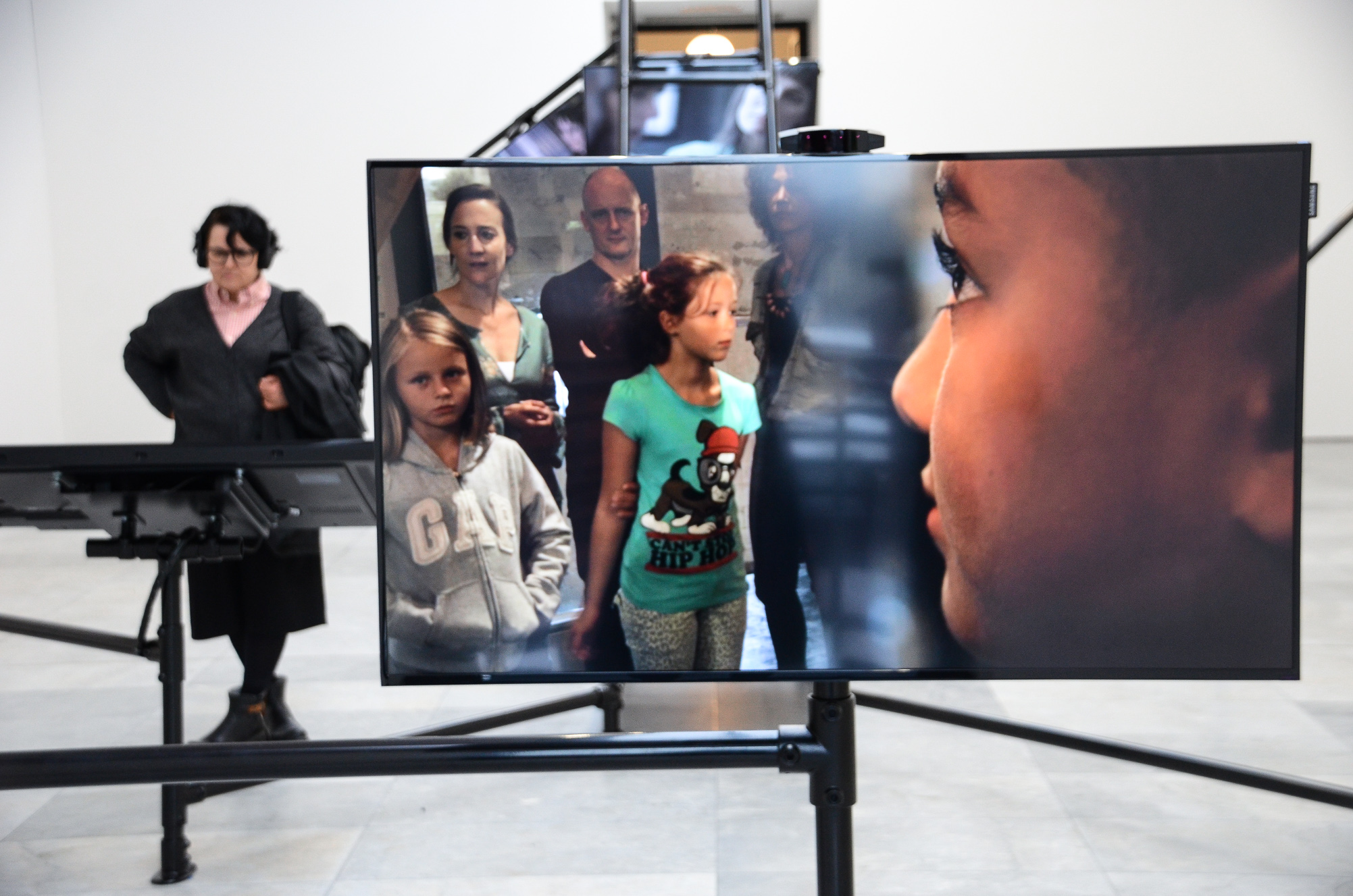 Gilligan lets the story hang here and concludes with a glimpse of ‘next weeks episode’ of The Common Sense, one that she did not intend to write, but that will potentially play out for each of us as we reflect on what we have seen: the relationships between progress and profits and hearts and minds, in the context of the the social medias we have integrated into our lives and rely upon everyday; on what possible consequences they might have for us as individuals and communities.

Apart from using the relatively traditional cinematic approach in a way that works well as artistic expression, the aesthetic experience of this video installation is naturally much more cohesive than in the original production in the Netherlands. The story previously told by fifteen screens distributed in three different viewing locations, necessarily set up as smaller installations, now meanders and twists through an integrated network of black metal, from one room to the next below the art museum’s high ceilings. The relative locations of the different episodes invites the viewer to look up, down and around as they move through them, giving a palpable impression of the issues the new technology in the story raises.

Video installations, including those using screens as sculptural objects, are not in themselves a particularly innovative aesthetic, display strategies in the genre having a long history stretching back to pioneers such as Nam June Paik and Wolf Vostell, and leading up to practitioners such as Laura Poitras with her exhibition Astro Noise, currently showing at The Whitney Museum. In other words it is not unusual for artists working with the moving image to do more than just ‘show’ it. In this respect it does not matter that Gilligan has made a relatively safe installation, as her subject matter engages through its content alone. Her framework presents themes that can affect individual viewers on a personal level while simultaneously being a universal political commentary, meaning the artist has made a strong artistic statement – for the relatively few who come to see it.

Translation by Jason Havneraas
For the Norwegian version