The British artist Stanza, who 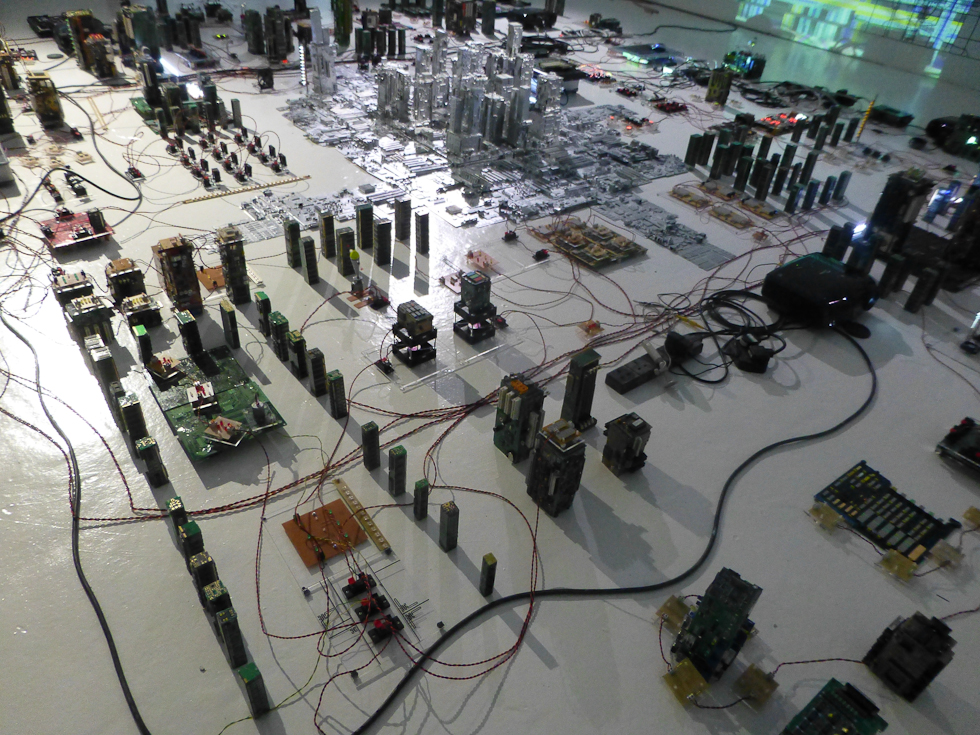 is an expert in arts technology, CCTV, online networks, touch screens, environmental sensors, and interactive artworks, has built the Emergent City at Trøndelag Senter for Samtidskunst during Meta.morf. Martin Palmer has spoken with Stanza about his production:

– You were one of the first artists to explore the parameters of the net as a medium for artistic expression in the mid-90’s. How has the web changed as an arena for art since then?

– Even within the narrow parameters of net arts practice the answer to this in all contexts would fill a book. However, given the 20 year history of the field hindsight allows us to see a shift from interactive, generative and systems based work that online networked culture allows. From a world of net art and static pages, often filled with narrative too complex or poetic re-mediations of real time, net art approach real world events that are increasingly questioning systems of ownership, control, surveillance and the environment.

– The internet now presents a myriad ways to create ephemeral art across networks, using all sorts of data information and media. It provides gateways and access for all, the editing process, mash-ups, authors as editors, as choice makers, as decision makers.

– One has to experiment with the technology and understand how to get under the bonnet, and then new outcomes will shed light on how data flows overlap in live streams, demonstrating what are the possibilities for novel artistic experiences and outputs, as well as new business models which will benefit from sonifications, visualizations, and sculptural objects; as well as apps, and feedback into other networks and integrated systems.

– How does your approach to net art differ from your work with installation, painting and other artwork dependent on physical space?

– My approach is the same for all, as research is at the core of my practice. The outputs to “research questions” are formulated and experienced as artworks or outputs.

I make artworks that arise from my research into these themes – the themes being ‘control space’ and ‘surveillance space’ and issues with privacy.

What I’m doing, which is sort of new ground, is that I’m hacking access to a network and re-appropriating the data and information, and I’m re-contextualizing it to give it a wider meaning. I want to show that you can do something positive with this data. And as I say data is the medium of the age.

– Where do you see net art is going from here?

– Increasing complex divergent and data driven experimentation might cause a reliance on other peoples systems of ownerships (i.e. apis, code bases, gateways) that will only have a certain longevity. As net art there are now several important levels of investigation and pathways.

By researching current systems, software and artworks one can come to an understanding about the social and ethical implications of such technologies, both in artworks as well as public domain, and to speculate where these technologies could lead us in the future.

The path I am taking is to connect virtual spaces online creating what I call “The Third Space”. Future cities/spaces will be merged into real time connected up data cities. A connection of networks of real time information flows. The results created lead to mashed up cities and real time performative city experiences.

– The urban landscape is a recurring theme in your work. What does the city represent to you?

– It’s the start point, the end point, as well as the borders that contains the space that any content, data, events or actions take place in.

The city is everything, everywhere, without limits. It’s a virus on the skin, spreading outwards, upwards, and underground. There is no need to limit the city. It has no bounds. The city itself is always changing; it is always in flux. Each aspect of city life seems to demonstrate specific characteristics which can be developed into individual parts of the labyrinth, making up the images that will be used. A city experience consists of small unit blocks and cells which inter-relate, and lock together to form the composite city identity. The city has moved from metropolis, to megalopolis, to the ecumenopolis. The city is everywhere, with lifeless design spreading upwards and forming a conundrum of physical objects in space.

Cities offer the opportunity for unique types of data gathering experiences via a variety of sources. With this perspective there are many unimagined threads of data and connections that describe our world that can be explored through wireless mobile networks, within which we can create new artistic interpretations.

The patterns we make, the forces we weave, are all being networked into retrievable data structures that can be re-imagined and sourced for information. These patterns all disclose new ways of seeing the world. The value of information will be a new currency as power change. The central issue that will develop will be the privilege and access to these data sources. Uses of this information and data should allow rich new interpretations on the way our world is built, used, and designed.

There are patterns, they are connected and the systems that evolve can be simulated and acted upon. The patterns we make, the visual and imaginative interpretations we give to real world events, are being networked into retrievable data structures that can be re-imagined and source for information. These patterns disclose new ways of seeing the world.

– How do you envision the cities of the future?

On a good day, sunny. On a bad day, Victorian dystopian and polarized by inequality of The Haves and the Have Nots.

We are connecting and monitoring not just the space, but the movement and agency of space. The motives for this are vague and questionable, from a variety of positions – ethically and morally.

We know about the surveillance cultures and the notions of the Panopticon. Too much is being “invested” into this controllable space. There is no doubt in my mind, the there are obvious benefits which are easy to cite. However, such a blanketing of control is a sophisticated red herring. It is too risky for a large population of have-nots. We are better off with no surveillance, and the investment should be made elsewhere.

Future cities will be merged into real time, connected up data cities´ connection of networks of real time information flows.

I am now interested in how this shared dataspace can overlap, creating a new space in between, which only two nodes share, a future avatar city. The aim here is to give tangible form to this new space, the space where the cities overlap, presenting an alternative urban virtual environment. In the prototype the audience sees the data and will be able to mix data from cities; they can even mix the data to make music with it. This novel approach allows a critical reflection on the real time city.

The Third Space speculates that social sensing might lead to a new social space and eventually a new business enterprises which can be exploited. What is possible is that significant breakthroughs in knowledge about the shared data experience can be achieved through user-based interfaces online, on mobiles, media facades and other platforms.

– At Meta.Morf 2014 you are exhibiting «The Emergent City. A Life From Complexity to The City of Bits.» The installation is described as an avatar city not only controlled by the real city, in terms of its function and operation, but also utterly dependent upon it for its existence. – You have already touched upon it, but what are your opinions about surveillance culture and data gathering, and how do you think it is affecting our societies, both offline and on the net?

Imagine walking out the door, and knowing every single action, movement, sound, micro movement, pulse, and thread of information is being tracked, monitored, stored, analyzed, interpreted, and logged. The world we will live in seems to be a much bigger brother than the Orwellian vision, it is the mother of big brother. Can we use new technologies to imagine a world where we are liberated and empowered, where finally all of the technology becomes more than gimmick and starts to actually work for us or are these technologies going to control us, separate us, divide us, create more borders.

– How would you describe the installation?

The real world is made virtual and the virtual is made real again and thereby exposed in the process. This whole piece is a living and breathing artwork. The project focuses on the micro-incidents of change, the vibrations and sounds of the environment using wireless sensor based technologies.

The city performs itself through an-other city. Cause and effect become apparent in a discreet, intuitive manner, when certain events that occur in the real city cause certain other events to occur in its completely different, but seamlessly incorporated, double.

– What does the city of Trondheim – where you exhibit your version – look like through the eyes of Stanza?

I actually created a vision of the city back in 2010. The project won the Nova, Folkets Hus facade international juried competition in 2010, with a dynamic facade, mirroring the dynamic activities taking place within the building.

The facade was to present the emotional real time state of the city of Trondheim, by using live sensor data, and CCTV images to represent the Nova Building as a living breathing entity. This vision integrates the Nova building within the city, via virtual means and locates it within the global online network. We are literally putting the building on the internet and at the centre of a new social space. – Anyway, I won the award, but they didnt get back in touch.