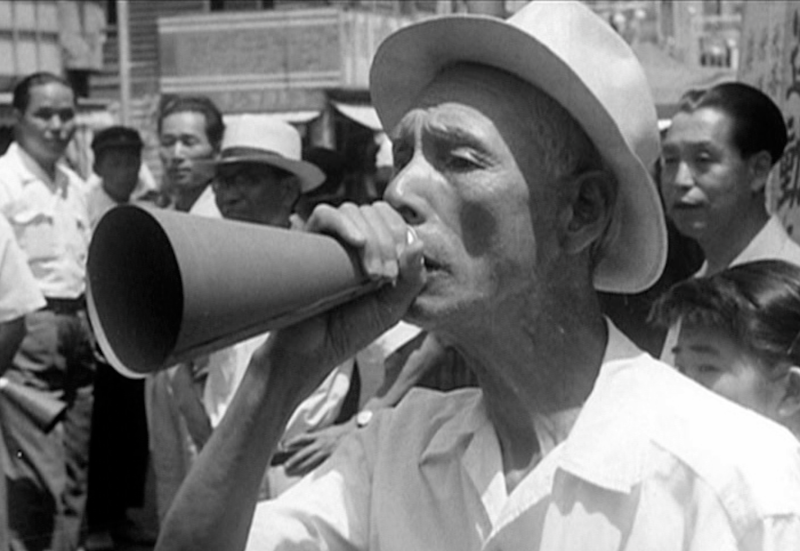 Anna Baumgarts new film PKF 1947, will form the basis for the conference § 100, The Arts and Freedom of Speech in The Contemporary World, which will take place at Lademoen Kunstnerverksteder on friday the 14th. In 2010 Baumgart participated in the Falstad Kunst project with the film Fresh Cherries. Martin Palmer has spoken with Baumgarts about her practice:

– Is all art political?

– As Chantal Mouffe claims, we can’t, in fact, distinguish between political and non-political art. For all art practices play an important part in establishing and fixing, as well as questioning the symbolic order that we live in. This is why one can claim that art practice always carry a political dimension.

According to Mouffe, “the real issue concerns the possible forms of critical art, the different ways in which artistic practices can contribute to questioning the dominant hegemony. Once we accept that identities are never pre-given, but rather the result of processes of identification and therefore discursively constructed, the questions that arises are the type of identities which critical artistic practices should aim at fostering.

Clearly those who advocate the creation of agonistic public spaces, where the objective is to unveil all that is repressed by the dominant consensus are going to envisage the relation between artistic practices and their public in a very different way than those whose objective is the creation of consensus, even if this consensus is seen as a critical one. According to the agonistic approach, critical art is art that foments dissensus, that makes visible what the dominant consensus tends to obscure and obliterate. It is constituted by a manifold of artistic practices aiming at giving a voice to all those who are silenced within the framework of the existing hegemony“.

– The § 100 Conference in Trondheim will discuss the relation between free speech and resentment, among other things. Is there a limit to free speech?

– Recently, when the discourse of tolerance and freedom of speech has turned against itself, becoming a tool of ambivalent interests, if not of oppression, I’m interested in questioning its grounds. But the question of limit to free speech is inextricably linked to the very phenomenon of this freedom. The issue of freedom of speech manifest itself primarily through the limitations imposed on it. For instance, in the name of defending the society against the threat of terrorism or for that matter, against so called hate speech.

– What can one expect from the § 100 Conference and the workshop?

– One can expect the agora, a re-opening of the unfinished debate, the agonistic confrontation, which is required by the democratic politics.

– The pivot of the conference is your art practice, and projects you´ve done in this region. How did you get involved in the Falstad Kunst project?

– The starting point, or the impulse, that gave rise to this project was my encounter with the photos and texts I found while researching the archives of the Norwegian Memorial and Human Rights Center in Falstad, on the invitation from artistic consultant Per Formo. I reviewed the digitalized archival materials with special attention to the visual ones.

As always when working on a project I looked for omissions and gaps hidden behind images, «liquid“ and «contiguous“ images, and “torn pictures”, as described by Georges Didi-Huberman. For “(…)what is hidden reveals itself only in secondary and apparently unimportant details”, to quote Frank Ankersmit, a renowned philosopher of history and narrativist.

Eventually, a few photos caught my attention. These were black and white photos presenting a modest theatre performance played exclusively by male actors. The photographs and the history behind them have become an impulse for further investigation and subsequent development of my visual narrative.

– The story in this two-part film can be summarized in the following way: in the winter of 1947 a team of the Polish Film Chronicle (PKF) arrived at the Falstad prison. PKF, that is, a crew of the official propaganda instrument of young communist state, had filmed a New Year revue prepared by the former Nazi functionaries, now (right after the liberation of Norway) the inmates of the work camp and prison.

Ironically, this was the same place that earlier, under the Nazi occupation, had housed a camp for the POWs and political prisoners (SS Strafgefangenenlager Falstad). So there occurred a kind of reversal of social and symbolic roles. A different gesture of reversal (or a twisting of meanings) was inscribed in the very revue, which took a form of loosely related sketches and acts titled Article 1000. What the Nazis referred to was the article 1000 of the Norwegian Constitution that concerned freedom of speech. The revue caused serious reservations with the Ministry of Justice inspector who claimed that it promoted Nazi ideology and therefore should be banned. But the head of the prison, Mr. Bugge, had a different opinion and didn’t allow to impose censorship on the performance. This situation was recorded by the Polish Film Chronicle, which interpreted it along the lines of the main propaganda objective, that is, the critique of Western democracy.

For me, the most fascinating aspect of this work was that in the story I found in the Falstad archive translated into the language of art the past can meet the present or, as Benjamin put it, “the present may recognize itself in the glimpse of the past”.

– How do you relate this material to the theme of the event?

The project PKF 1947 can be inscribed in the broad current of critical art reinterpreting or reactivating history. In fact, this current is in accordance with a broader tendency of contemporary culture, a tendency described by several commentators as “the turn to past”. As an art historian Izabela Kowalczyk writes, “Art more and more often refers to what was «yesterday», dwelling on the problems of history and memory. One can trace a growing interest in the recent history, especially in the issues of the Second World War, Holocaust, and (as for the Polish art itself) in Polish-Jewish and Polish-German relations, the deportations, the history of the People’s Republic of Poland, and the liberation upsurges”. Indeed, according to many commentators, it is precisely that what exceeds the institutional norms, developing itself on the margins, beyond the official history, that has become the main focus of the critical art. One can point to Foucault’s conviction that art practices set “local, discontinuous, illegitimate knowledges against the unitary body of theory which would filter, hierarchise and order them in the name of some true knowledge”.

This historical turn in our culture can be related to another interesting phenomenon – the increasing (both among scholars and artists) interest in the archives, sometimes referred to (in Derrida’s words) as the “archive fever”. As the French philosopher claimed, it is motivated by a feverish desire to find the beginning and the unquestionable principles as well as by nostalgia for the truth hidden in the archives. The conception of archive is related to the Greek arche, which signifies, on the one hand, a beginning and cause, and, on the other, law, ordinance, and authority.

Already in Foucault we find critical remarks on violence inherent in the archive that is not only a repository of documents, but also – and above all – a “general system of speech-formation”, “a discursive principle restricting that which can and cannot be expressed”. According to Derrida, the force behind the archive is the death drive, which brings not only “the annihilation of memory(…), but also commands the radical effacement, but also commands the radical effacement, in truth the erradication, of that which can never be reduced to mneme or anamnesis […] Archive is aporetic: it always works against itself. At the same time, however, the archive is always a sign of future – for the future that what is not archivized in a way dies“.

In my recent project PKF 1947 I refer to the category of archive in several ways. First, on the most literal level of an archival query – for it was in the very Falstad archive that I discovered and, in a way, regained these “dormant” pictures and their history. Second, these pictures survived in Mr. Bugge’s (the head of the prison who didn’t allow to censor the performance) private archive. The gesture can be read as ambivalent: either as a wish to perpetuate the “true history”, or as a defense of free speech, or as revealing the pro-Nazi sympathies guised in a “democratic mask”. The third level, or rather meta-level, is the reconstruction of the revue §1000 (1947) itself, and the presentation of the whole story and circumstances of this performance through the medium of black and white film, which pretends to be an archival material of the Polish Film Chronicle.

It is also related to my 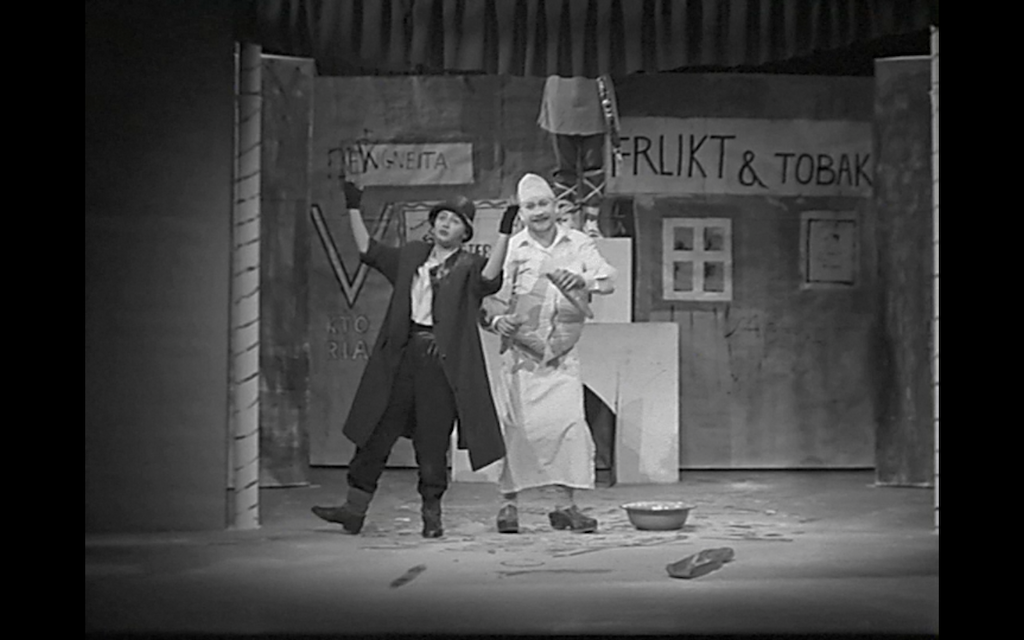 previously employed strategy of mockumentary, a movie genre that intermingles fiction and reality. In my previous movies, The Fresh Cherries (2010) and The Conquerors of the Sun (2012), I have linked the archival materials (found footage) with the film sequences imitating various film and TV genres, directed by myself. Just as in § 1000, the process of film editing was predated by an archive query. While working in the Moscow and Berlin City Archives, I watched the archival tapes on the old editing tables, because the materials hadn’t been digitized yet. In the capital of Russia I found not only the materials about agitation trains (later employed in The Conquerors of the Sun), but also some propaganda movies with animations and expressive film images directed by a revolutionary poet Vladimir Mayakovsky in 1919.

The main parts were played by Mayakovsky himself and a sculptor and film director Lili Brik. Also this almost unknown footage, seducing us with a kind of camp today, was included in The Conquerors of the Sun.

– In addition to your own works, you have been involved in several social and organizational activities. Do you make  a distinction between your own artistic work, and Baumgart as curator and producer?

– In fact, I always work as a curator, a kind of creative producer of my projects, which is why I don’t see an important difference here. I tend to invite to my projects the creative subjects that are intellectually independent, and the works that result from such a cooperation are the resultant of a multiplicity of forces: the tempers of the people I invite to work with me and my own artistic assumptions.

– How do you wish to develop your work in the next 10 years?

I need to find some time to have a cup coffee and think about it. But this would be possible only when I finish my current projects, which keep growing into the new ones, as it were… and I can’t see the end of this.