Mutations of the Digital Wild 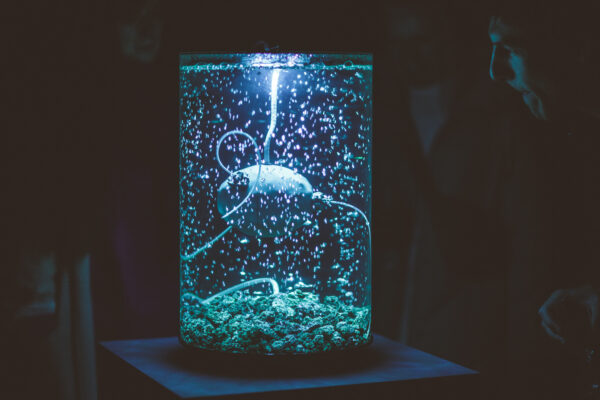 The Digital Wild exhibition that opened on March 5th at Gråmølna, was part of the 2020 edition of Metamorf, Trondheim’s ambitious technological art festival. The show at the Kunstmuseum consisted of artworks by 12 international artists and collectives featuring elements of, among others, digital geomancy (sand science), biotechnology, and various science fiction strands. It was cancelled a week later due to the pandemic outbreak, following a “not active due to corona hazard” sticky note that hung on a VR headset during the last days of the exhibition.

In this text I will treat a selection of works incorporating mainly biotechnology and/or biopunk.

Anna Dumitriu and Alex May’s Archaebot: A Post Singularity and Post Climate Change Life-form is an installation that imagines an aquapunk-evolved form of primitive marine life. But isn’t it paradoxical, one might ask, to speak of a post climate change life-form if climate will be ever changing?

In Realness – Intimate Garden, Sandrine Deumier offers to us a “cybernetic garden” via both a sizable spherical video projection and a 360° VR animation.

The video presents a series of ultra-digital devices, figures, animals and creatures, all seemingly stemming from each other and/or fusing into and fissioning out of one another. Some elements gain more or less familiar form and shape in an anamorphic fashion. At some point, a woman figure emerges: her hands are amputated, and her lower body is a mutation of a four-legged piece of furniture. This hybrid body evokes the grass/tree-transforming white antelopes in Alex Garland’s film Annihilation (2018). The universes in which such film, installation and many works across different media exist – one could also think of Francis Bacon’s paintings – are separated from the rest of the world in time, space and (anti-)matter. The result in both examples here is a “renatured humanity” and “a symbiosis between the human being and his natural environment”, in Deumier’s words.

The VR animation traps the viewer inside a macro-digi-organic cluster of the mutated entities. The components of this cluster could almost be a biotech version of Mario Saba’s computers, chairs, floppy disks, CD’s, ‘telephones’ of his near-millennial sculpture Le Tourbillon (The Swirl), which since its creation by El-Mina’s corniche in Tripoli, in 1995, has been ‘worked upon’ by the surrounding sea-salt air.

Finally, Lorenzo Oggiano’s work is the fruit of seamless laborious research and implementation of animation, sound generation and 3D modeling. His Environmental Monitoring System (2016) is a 4-channel video installation, along with prints providing dissective cross-sections of some of the animated models. Each TV screen presents different generated footage of virtual “re-designed” life-forms alternating between organisms and solid objects that mutually contaminate each other in bio-digital jump cuts. Such eco-systems are the “consequence of techno-biological evolution”. The footage is ‘signed’ by an imagined, numbered surveillance camera. The artist turns the surveillance authority and power on its head by erasing “the boundaries between subject and object”, as well as establishing a “reciprocally constitutive relationship between observing and observed systems” in order to “bring the human back to the same side of the other living beings” (Oggiano).